G.i.N. GmbH was founded by Wolfgang Bassenauer and Andreas Schoenberg in 1991. The company’s headquarter with development, production, service and support is located in Griesheim. Besides data loggers, we offer far-reaching application and engineering services on site at our customers as well as education and training in the handling of our data loggers. Today about 95 employees are working at G.i.N. GmbH. In all our actions we place special emphasis on healthy and sustainable growth. From the founding of the company, industrial networks and field bus systems have been a core competence of G.i.N. and quickly led to our core business of today: a wide range of data loggers for various applications in the automotive field and on test stands of all kinds.
Intelligent data loggers record CAN, LIN, FlexRay, MOST, Ethernet, USB, RS-232, K-Line, GPS, digital and analog values, voice, pictures and video streams, are serving as gateways, are performing rest bus simulation, control and regulation, are allowing online data reduction as well as sophisticated trigger mechanisms. Our data loggers are perfectly aligned to our powerful software tools to offer you the best solutions for your highly complex applications.

I have founded G.i.N. GmbH in the year 1991, together with Wolfgang Bassenauer. Since then, I support the company as a managing partner as well as a software developer, and until 2017 as a development manager. Our goals with founding this company are still evident in our name; industrial networks (read automation technology). 1996 is the starting point of our involvement in the since then steadily increasing requirements from the automotive industry, especially regarding data loggers. We accepted this challenge whole heartedly. So much so, that nowadays this is our main business area.

As a trained engineer of electrical engineering and information technology, while employed by various TIER1 suppliers of the automotive industry, I put many interconnected navigation, telematic and ADAS systems on the road. The time spent working together with notable OEM customers allowed me to develop a keen perspective as a user of these products. This view is essential when developing new G.i.N. measuring systems. This added value will help to achieve success and further advancement for our company and employees! 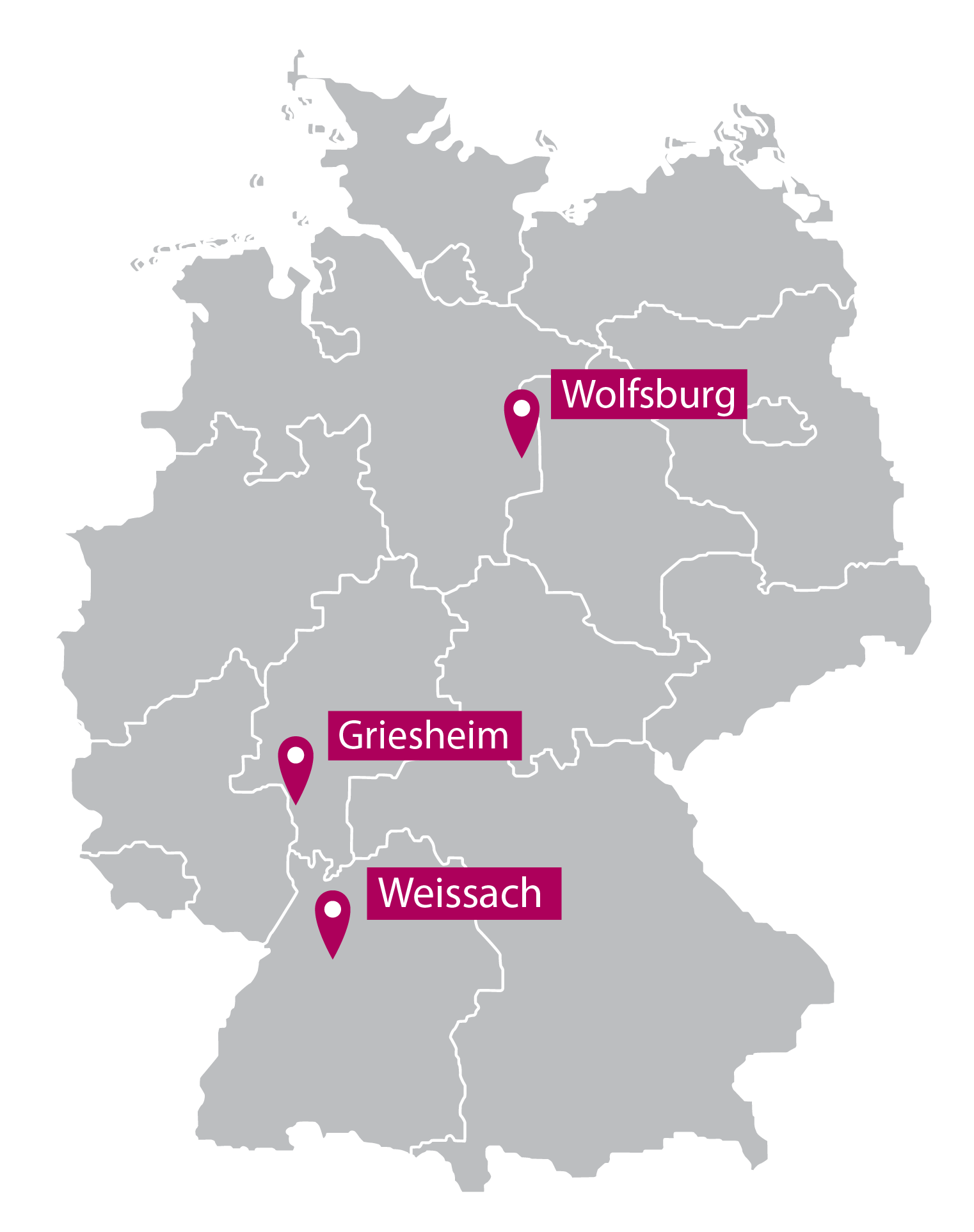 In our headquarters in Griesheim, we develop, produce and market our products, worldwide. The spatial proximity enables a close exchange as well as a successful and coordinated cooperation between our departments.

The location in Wolfsburg is the first point of contact for our services and for worldwide customer service. Here, we present all our customers a clear and concise showcase of all our services and data loggers.

Weissach is responsible for customer service in and around Stuttgart. This location offers our customers different services, all on-site, in order for them to support their entire corrective action process with our data loggers.

Become Part of the Team

Launch with us into a safe and fascinating future. New challenges, interesting projects and a friendly and supporting team are waiting for you. Discover your career with G.i.N.
Job Opportunities

Our Company Values
and Guidelines

A constructive and respectful teamwork is our strengths and our key to success.
To achieve effective and fast project work and quality assurance within G.i.N., we support and promote team culture.
We aim for a fair and long-term relationship with our customers and business partners which is characterized by equality, reliability and trust. 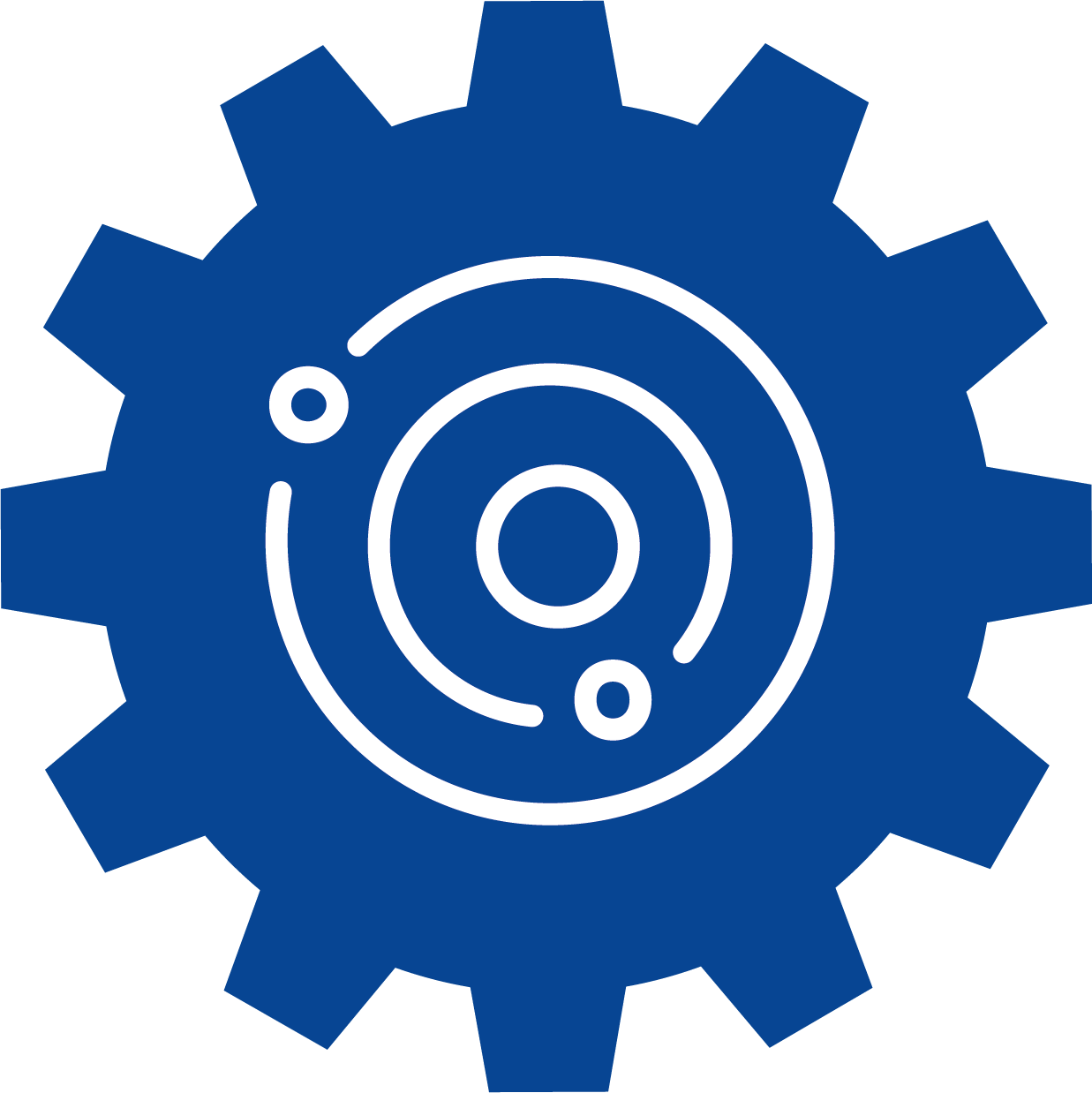 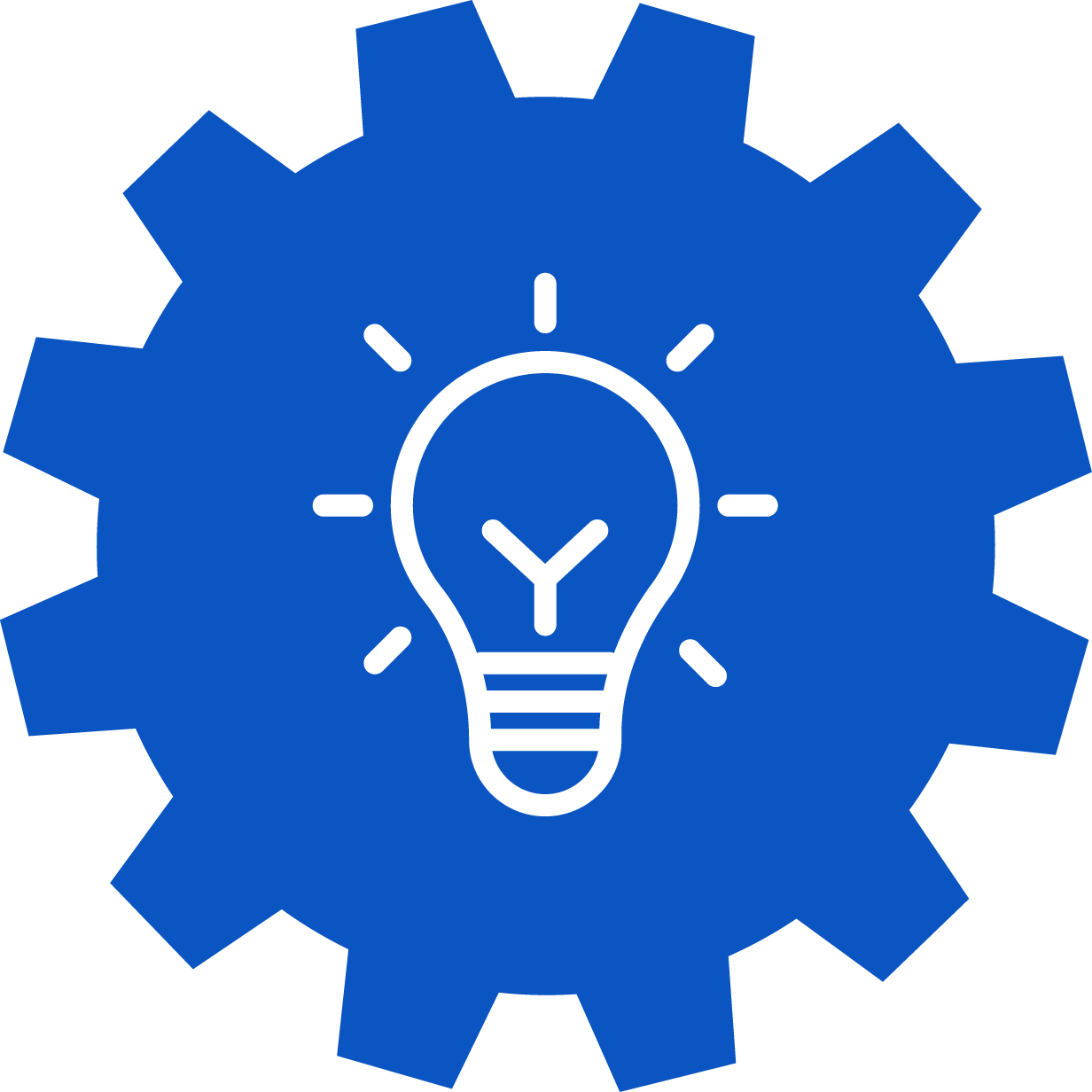 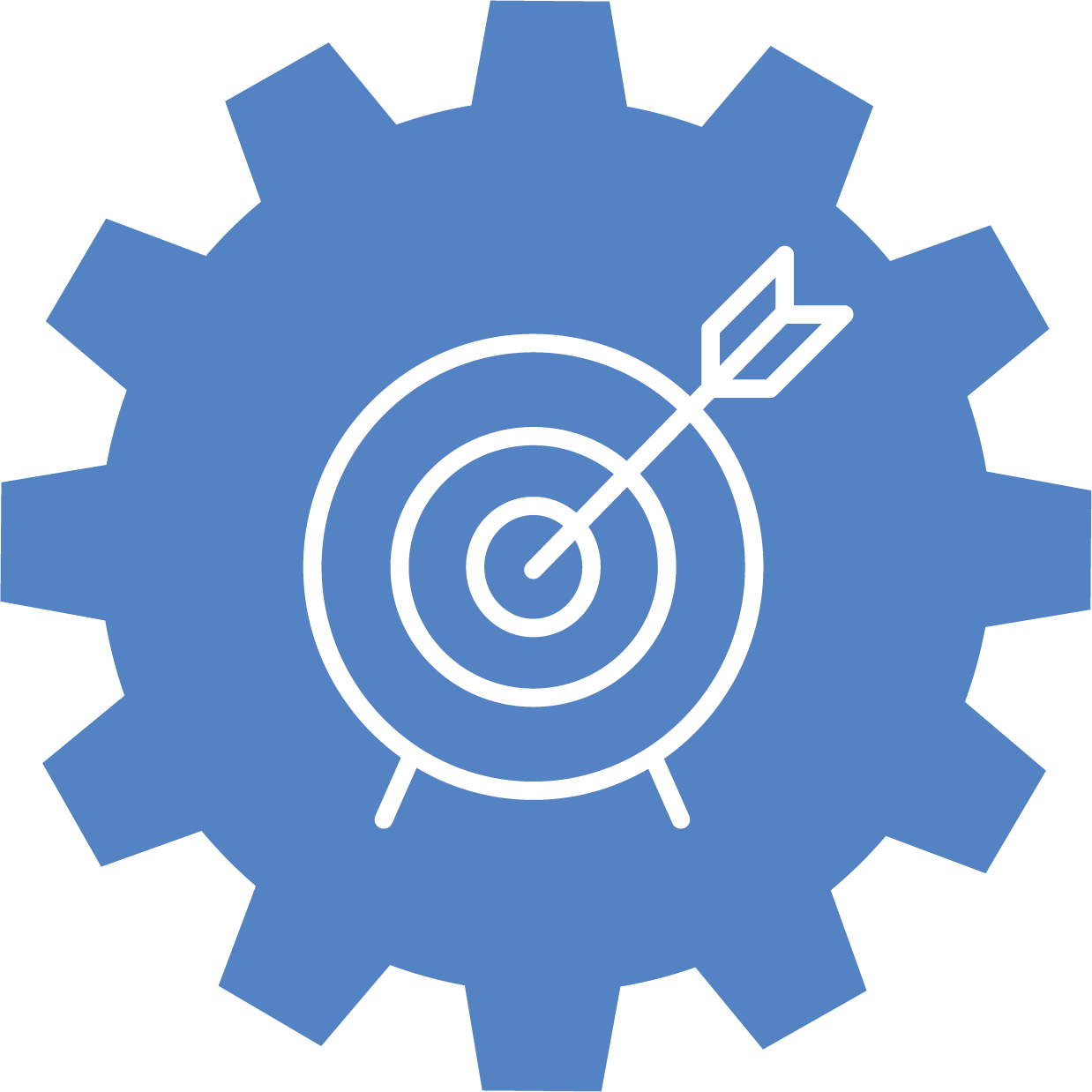 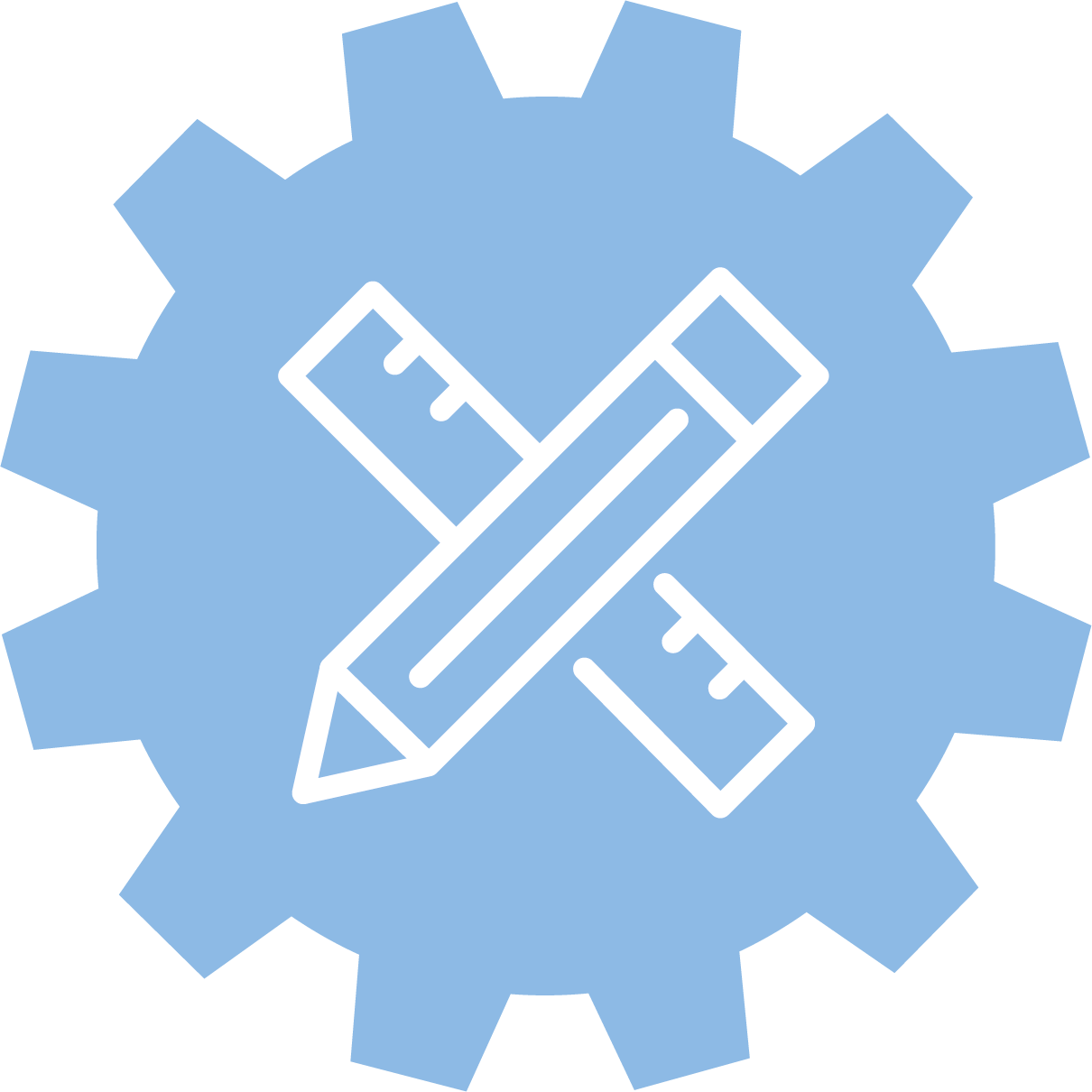 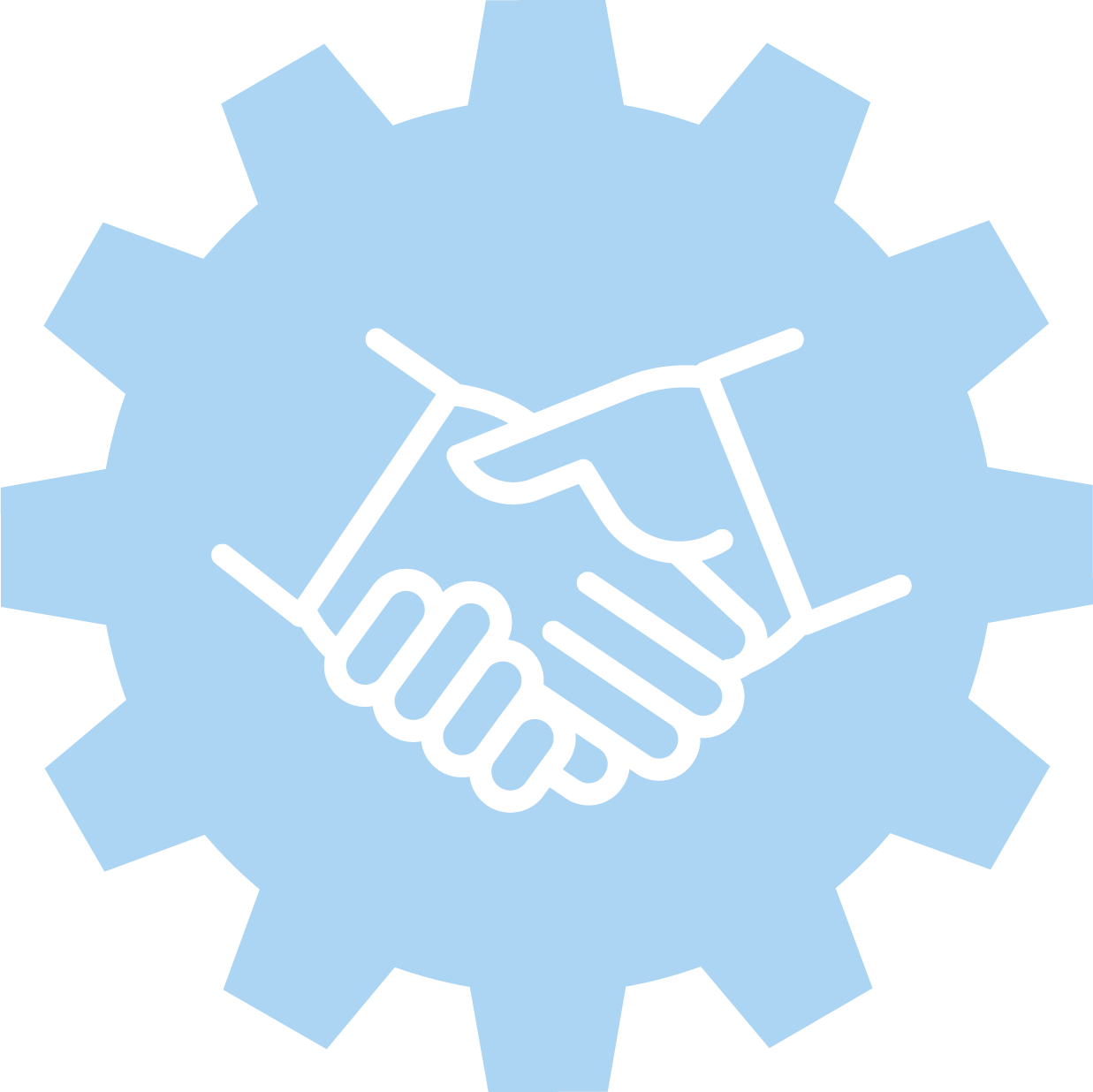 Future-oriented thinking and acting are the base for shared commercial success.
Every employee should be able to work, decide and take responsibility independently, depending on their skills and assignments.
Sustainability

Our Contribution to
Waste Prevention

We use renewable resources wherever possible. Everyone is responsible. The team of G.i.N. does not want to just follow others here, it wants to lead with a good example.
Our products are packaged in recycled cardboard boxes. The filling consists of recycled paper, both made in Germany.

Quality and safety are not only important for our devices: It is also important for our provided service. Because of this, our workflow and processes are certified by the quality management systems standard DIN EN ISO 9001.   The TISAX standard regulates responsibilities, quality assurance measures as well as internal and external communication in a company.

The ISO 9001 : 2015 certification confirms that the G.i.N. GmbH introduced a quality management system which it uses for the following areas: of products and devices related to industrial network technology. 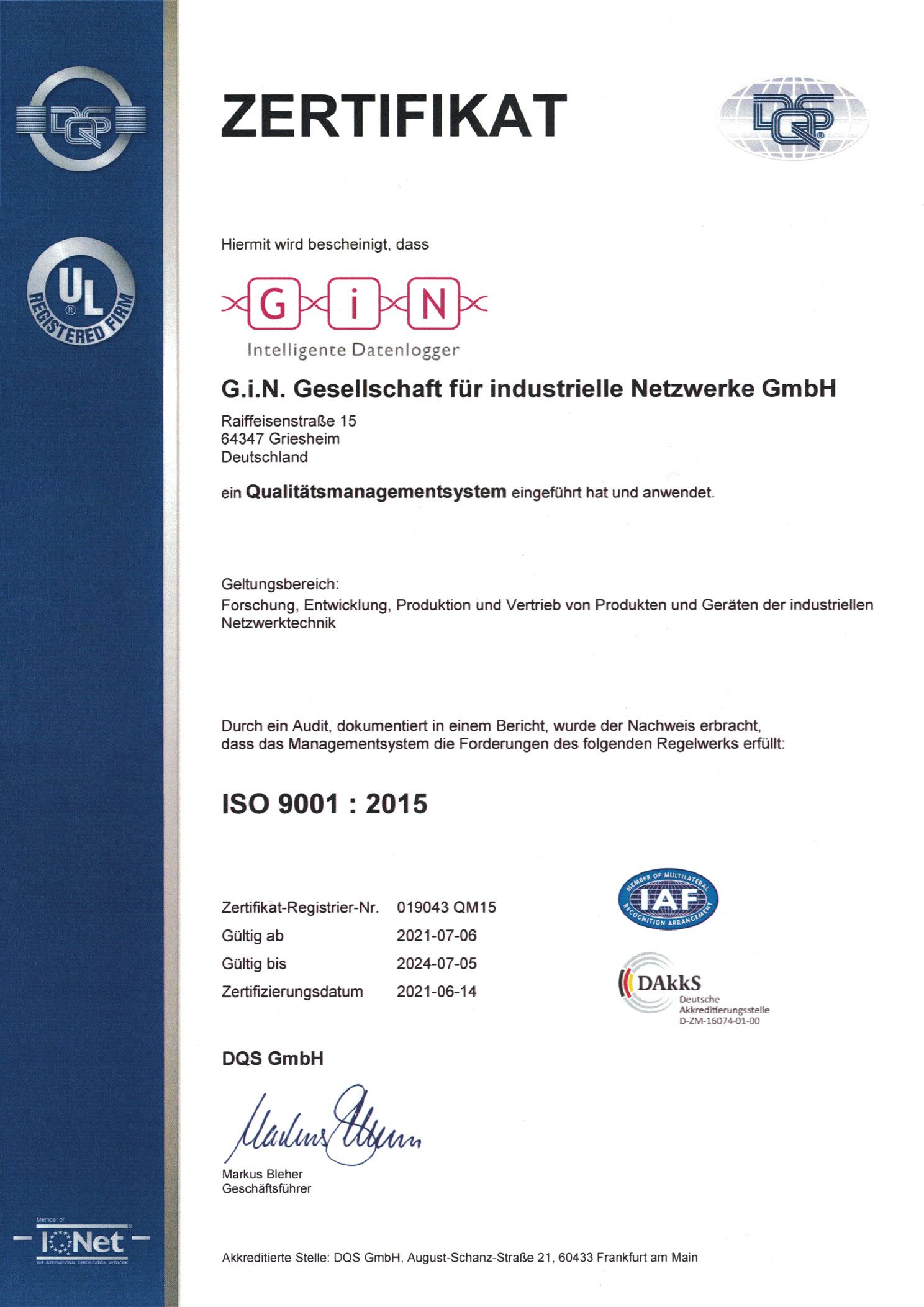 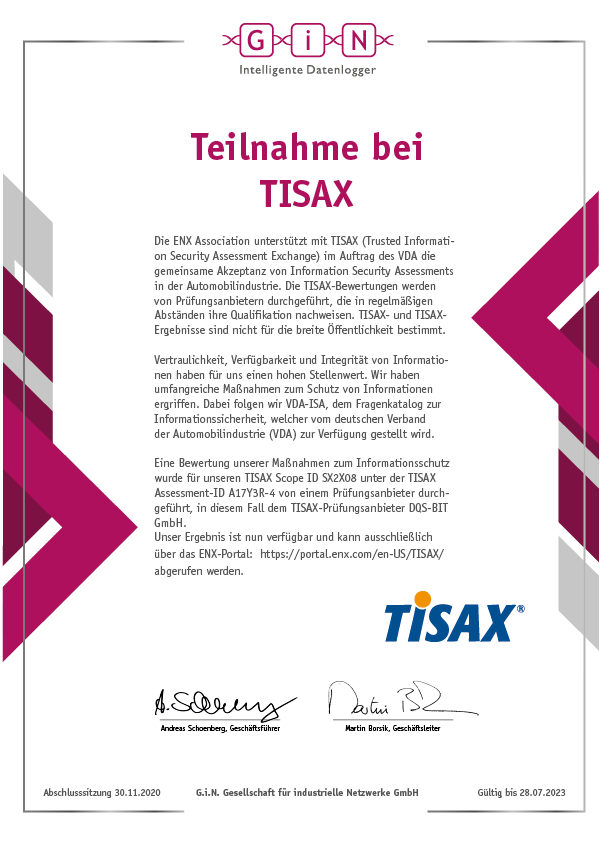 In 1992, the non-profit association for international customers and manufacturers for CAN (Controller Area Network) was founded.

The full name is CiA (CAN in Automation).

The aim is to provide an unbiased platform for future CAN-related specifications and standards as well as building up the image of CAN technology. This is realised in the ISO 11898 standard and is continually refined and developed further. 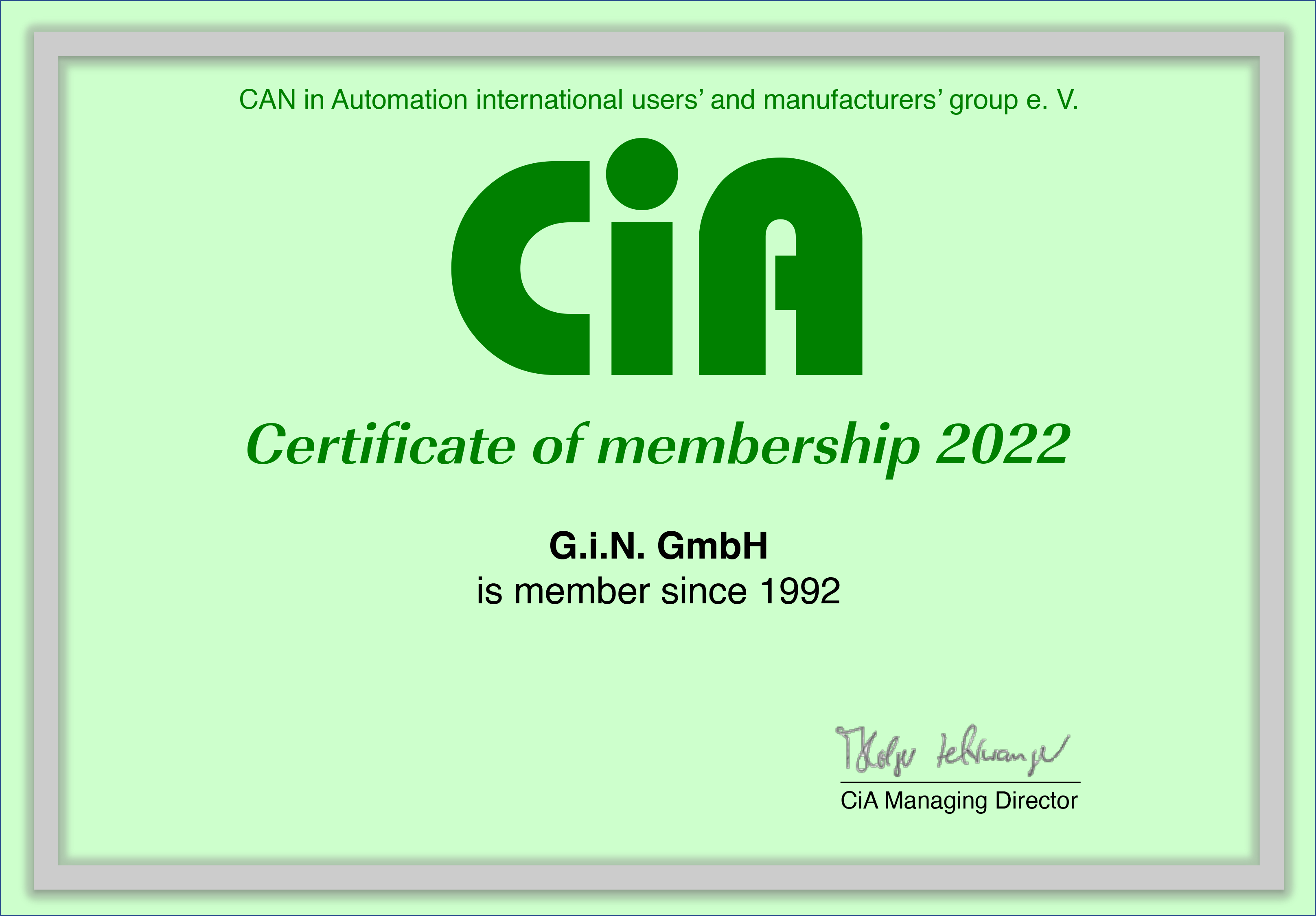 Requirements Regarding
Materials and Substances

Information regarding WEEE and ElektroG
1. The Revision of WEEE (waste electrical and electronic equipment) was accomplished with 2012/19/EU in the year 2012. The implementation into German law was ineffect with the revision of ElektroG, from which the regulations are taken,originally belonging to the RoHS.

WEEE-Reg.-Nr. DE 20824942
Information regarding RoHS and ElektrostoffV
The revision of RoHS (restriction of certain hazardous substances) was accomplished with directive 2011/65/EU of the year 2011. The implementation of RoHS into German law, formerly part of ElektroG, followed with Elektrostoffverordnung (ElektroStoffV) in May 2013 as an independent regulation.

Compared to the previous version, changes include expanded areas of application (“open scope” and generic category 11) and the linking of RoHS to the CE declaration according to the new mode based on the EU framework 768/2008 which will be gradually extended to all CE relevant regulations.

The new requirements of the CE mode, integrated in the RoHS revision, is implemented in our processes and products and we are in the position to prove this with our documentation.

G.i.N. Gesellschaft für industrielle Netzwerke GmbH (G.i.N.) respects the compliance of the RoHS substances limitation already in the product development phase. Additionally, we fulfil our duty of care along the supply chain per case via direct requests to our suppliers or via systematic research on websites of component manufacturers which also influences the rating of the supplier.
G.i.N. products are part of product category 9 – “Control and monitoring equipment” – and claim the respective temporary regulations and exceptions in some individual cases.
Information regarding REACH
The REACH regulation EC 1907/2006 is concerned with chemical substances and preparations which are to be registered to the European Chemical Agency ECHA by companies manufacturing and importing these substances. Additionally, REACH regulates the obligations of documentation, testing and informing and it defines a gradual approach in which critical substances (SVHC – Substances of very high concern) are gradually limited and, if necessary, banned.

G.i.N. Gesellschaft für industrielle Netzwerke GmbH (G.i.N.) as a manufacturer of devices and device components – i.e. Articles in REACH terminology – is affected by the described obligations only in exceptional cases in customer relations:

1. Mandatory registration is only needed for substances which are released by the article as intended, i.e. according to the functions of the article. Articles of this description are not supplied by G.i.N.

2. Regarding the substances in the Articles: There is an expanded obligation to inform customers if alarming substances of the so-called candidate list (SVHC) are contained in a concentration of more than 0.1 mass fraction of the article. We are aware of the relevant important principle of the European Court of Justice (ECJ) from Oct. 2015 and its meaning for the suppliers. A yearly amount of more than 1t requires a message to the ECHA as the responsible authority. We fulfil our duty of care along the supply chain per case via direct requests to our suppliers or via systematic research on websites of component manufacturers.

3. According to REACH regulations, extended safety data sheets are only needed for substances and preparations. The same is true for information regarding the registration of ingredients, if safety data sheets for the respective substances/preparations are not needed per REACH. These substances/preparations are not supplied by G.i.N.
Information regarding "conflict minerals" / "Dodd Frank Act Sec. 1502"
The Dodd Frank Act is part of US law and, specifically section 1502, is concerned with the so called “conflict minerals” and their respective countries of origin. Here, especially because of the civil wars, the DR Congo and its neighbouring countries in Central Africa are rated as alarming. Companies which are listed on the US stock exchange are required, by the Dodd Frank Act, to not obtain the following materials from the respective countries and to enforce this throughout their supply chain.

This means that companies worldwide, which do not underlie US law, are indirectly affected via the supply chains. We, as G.i.N. Gesellschaft für industrielle Netzwerke GmbH (G.i.N.), are consistent with the humanitarian and ethical targets which are to be pursued by the present regulations.

Additionally, we support our customers after the principles of the “reasonable country of origin inquiry” and “in good faith” which are addressed in the Dodd Frank Act.

Gi.N. uses the mentioned materials not directly but in the form of supplied electrical and electronic parts, printed circuits and electromechanic components as follows:


Since our products have high requirements regarding the technical properties, we use electronic components of notable and mostly large and internationally active manufacturers.

It is not within our power to demand information from these manufacturers of the exact source of their used materials.

However, G.i.N. does check, in the context of ensuring compliance with RoHS and REACH, if the respective manufacturers position themselves appropriately regarding “conflict minerals” and create official templates with details of metallurgic and smelting plants or, at least, deliver meaningful statements.
In these cases, e.g. tin is not procured of manufacturers described above, we send an inquiry to our suppliers.

On this basis, we have no reason to believe that our component and parts manufacturers do receive the respective materials from the DR Congo or its neighbouring countries.

Abbreviations and their definitions